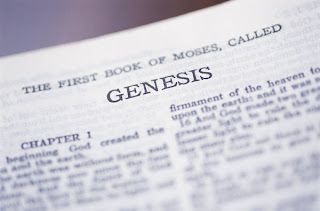 "When God began to create heaven and earth, and the earth then was welter and waste and darkness over the deep and God's breath hovering over the waters, God said, 'Let there be light.'  And there was light.  And God saw the light, that it was good, and God divided the light from the darkness." - Genesis 1:1-3 (Robert Alter, trans.)

Science tells us that once upon a time the entire universe was one.  Then something happened, a massive explosion of the one, which then became the many.  My small mind cannot begin to conceive of the vastness of the many.  Planets, stars, dark matter, oak trees, earthworms, mushrooms, and me -- all that is, once, says the science, was one.

Unremarkable, then, that the first creation story in Genesis, the very first story in the the whole of the Hebrew and Christian scriptures describes the same phenomenon.

In the beginning (as we're more accustomed to hearing), there was nothing but, in Robert Alter's expression "welter and waste."  He says in his note that the Hebrew for the first word tohu "by itself means 'emptiness' or 'futility.'"  The second word in the Hebrew (wabohu, if you're interested), appears to have been "coined to rhyme with the first and to reinforce it."  Emptiness and futility:  Nothing, and, anyway, what's the point?  From this pointless nothingness comes everything.

God's breath (in Hebrew, ruah, also wind or spirit -- or Spirit) breathes upon nothing and makes it something -- first light, then a "vault in the midst of the waters" to "divide water from water," then dry land, grass, seed-bearing plants, sun, moon, stars, fish, birds, beasts, humans.  In the story, God divides and divides and divides -- light from darkness; sky from seas; day from night; trees from grass; fish from birds; beasts from humans.

That is the story of creation, from science and scripture both, the story of division, separation.  What was one, now is many.  And God called it good.

In his message for New Year's Day for 2012, Fr. Richard Rohr (if you don't know who he is, make sure to find out; check out the link in the sidebar) says, "Differentiation seems to precede union and communion, for some strange reason."  Indeed, the "emptiness and futility" with which we started puts me immediately in mind of this bit of Romans 8:


"...for the creation was subjected to futility, not of its own will but by the will of the one who subjected it, in hope that the creation itself will be set free from its bondage to decay and will obtain the freedom of the glory of the children of God." - Romans 8:20-21 (NRSV)

Before there was separation, division, creation, there was no "us," only God.

"For I am convinced that neither death, nor life, nor angels, nor rulers, nor things present, nor things to come, nor powers, nor height, nor depth, nor anything else in all creation, will be able to separate us from the love of God in Christ Jesus our Lord."

No thing can perpetuate the separation of us, me, from the love of God in Christ.  All this dividing has had, as its ultimate object, the union of creation in all its uniqueness and diversity, with the love of God, revealed and brought to fruition in Christ.

Chris Sullivan
Co-creating a world where we can discover and live the truth in love.